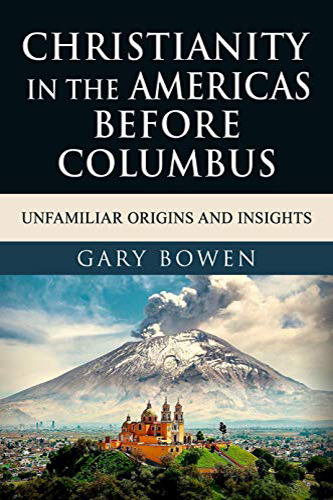 Christianity in The Americas Before Columbus: Unfamiliar Origins and Insights

Who was Fray (“Friar”) Servando Teresa de Mier?
What did he do and what did he write? Fray Mier born 1763 in Monterrey, Mexico, died 1827 as a guest in Mexico’s Presidential Palace. He came to be the most popular man in Mexico. Two centuries later Fray Mier is unknown even in his native Mexico. Why and how did this happen? The life and writings of Fray Mier is a “Mier Paradox” described in Christianity In The Americas Before Columbus: Unfamiliar Origins and Insights. Dr. Mier’s writings give Unfamiliar Origins and Insights to the history of Mexico before and after Columbus. Mier writing: “And, who does not know of the blasphemies of the incredulous against the Christian religion, whose Divinity, they say, was testing them for sixteen centuries, up to crushing their bones, with its expansion into all the world by only twelve men, and with the universality of the Church; and in the end a New World was discovered where nothing was known of it? It is false. Throughout America, monuments and vestige evidences of Christianity were found, according to the unanimous testimony of the missionaries.”

Those early Catholic missionaries were the source of Fray Mier’s research and writings. Mier wrote his “Farewell Letter to the Mexicans,” 1820, while incarcerated in San Juan de Ullúa Fort. Mier’s “Farewell Letter. . .,” has this closing mandate: “My fellow countrymen stop howling and instruct yourselves. . . The Deists themselves today confess that the ancient preaching of the Gospel in America is beyond doubt.”  Pursuant to Fray Mier’s mandate to his Mexican countrymen, we too must instruct ourselves on those early Catholic missionaries’ writings, which give historical authenticity to the ancient preaching of the Gospel of Jesus Christ in the Americas.