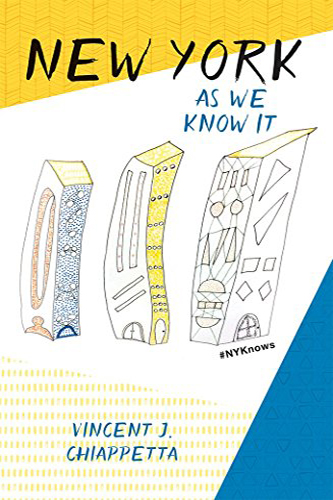 New York As We Know It

In 2017, Vincent Chiappetta embraced his creativity and authored a book of poetry and artwork, entwined with his life-long love of running called, New York As We Know It. Chiappetta’s poetry is based on his long history with observing the people and the city while on the run. Chiappetta explains, “Running through cities is a part of my exploration. As I run, I see, interact, and build images that I put together in my poetic interpretive responses, my poems. I write on the run with a pad I carry. I recall my impressions as I finish. I recall moments as reminders pop up in my mind. As if to see in words my views of the world of people and structures around me. Hopefully others will relate to my words and receive something similar in vision and intensity as I experience.”

New York As We Know It is available now.

Running for 71 Years! NYC Marathon Co-Founder Vincent Chiappetta Interviewed by BBCThe BBC-UK recently did an in-depth interview and lifetime achievement profile about NYC Marathon Co-Founder Vincent Chiappetta (https://www.bbc.co.uk/sounds/play/w3csym74), arguably one of the most important people in New York City’s running history. Vince began volunteering at races in 1963, while his running career began at NYU in the mid-1950s. For Chiappetta, age is just a number and he isn’t done running yet—not even after 71 years! While he no longer runs the NYC Marathon, he proudly supports the runners and he still laces up his running shoes to enjoy the outdoors, people watch and contemplate the city, running a mile or two a day. Chiappetta is a good case of a hobby turned passion that fueled an entire lifetime of friendships and experiences. His running buddies included Ted Corbitt, Kurt Steiner and Tom Osler. He has been a biology professor at Yeshiva University since 1954, he coached Track and Field and started their running team in 1981.In describing his life philosophy and how his running life has changed as he has aged, Chiapetta says, “I look at life as a continuum, a coherent whole characterized as a collection, sequence, or progression of values. That pretty much sums up my life. I never set goals I couldn’t accomplish.” He was an early proponent of allowing women to compete in running sports on an even basis with men. It may be hard to imagine today, but in the early days of running sports, women were often discriminated against in the sport. Chiapetta is also proud of being part of the movement to make long distance running a separate sport, moving it out of track and field where it began. He worked tirelessly over many decades to change the rules of the sport to be more athlete friendly.